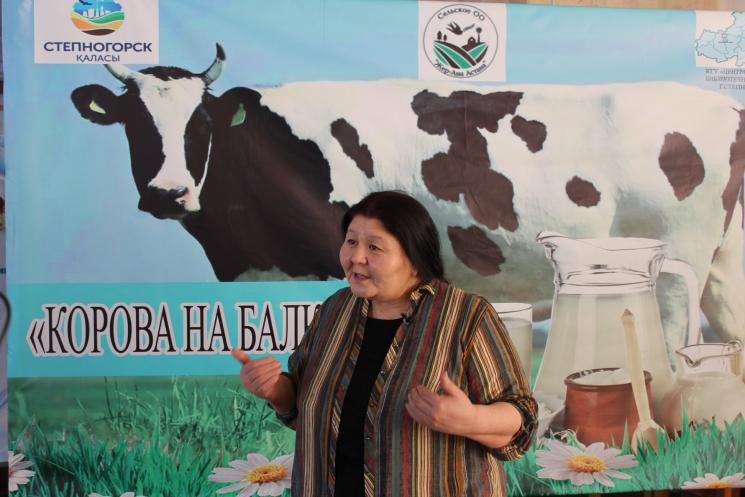 Connecting consumers and food producers at the micro-level is crucial for the development of sustainable food systems. This can help consumers to avoid stale and sometimes unsafe food and instead have access to fresh local products. Meanwhile, such an approach supports local farmers and the rural economy as well as rebuilding social capital based on trust and other societal values. With this issue having been around for some time now, consumers are increasingly more often searching for fresh, locally sourced food. In an exclusive conversation with DevelopmentAid, Gulmayra Baymakova, the head of an NGO and a recently appointed expert on development in rural areas and the development of rural entrepreneurship in the Akmola region in Kazakhstan, shared her experience of how linking urban consumers with rural women who manage household plots can contribute to higher employment in rural areas as well as increased incomes for female producers.

State award for “Assistance in ensuring employment of the population”

Gulmayra Baymakova heads the Jer-Ana Astana NGO which, in addition to its local activities, is also a participant in several international projects such as PACE supported by the Agroecology Fund and the TAPE exercise supported by the UN Food and Agriculture Organization. In 2021, the NGO won the state award “Tandau” (choice) for “Assistance in ensuring employment of the population”. This award is becoming increasingly more prized given that 20,000 civil society organizations fought for it last year. It represents deserved recognition for the efforts made by Jer-Ana Astana to create 150 jobs for villagers where it organized meetings for people to help them to become entrepreneurs, learn about existing government programs and establish cooperatives. Furthermore, the NGO “has been actively promoting projects in the region to protect the rights of rural residents, preserve biodiversity and traditional knowledge in the development of private household plots”.

“This award opens many doors to us as now everybody knows about us, and values our work,” commented Gulmayra, the President of Jer-Ana Astana.

‘Cow on a balcony’ – a project connecting urban and rural women

On the one hand, the NGO serves as a bridge between the state and society by working closely with the local employment centre and informing the population about existing employment programs. On the other hand, it helps to open small enterprises, one example of which is the ‘cow on a balcony’ project which aims to address a double challenge. Gulmayra explains that food that comes from a farmer who is a thousand kilometres away is unlikely to be fresh so, one of the strategies used is to apply chemical products and collect the crop when it is still green so that it has ripened by the time it arrives at its destination. According to Gulmayra, there are many chemical products that can aid this process and, for instance, turn a tomato which was green yesterday into a completely red one today. She recalls the story of an urban woman working in a bank:

“The woman at the bank has two children. They were always allergic to products bought in the supermarket but they were absolutely fine when they consumed home products from small farmers. The city woman was worried about the chemicals and other substances added to products, but buying from an unknown farmer was not an option for her. She wanted fresh and safe products. Where could she go if she does not know anyone?”

Although food can be imported, the demand for locally sourced food is growing. For instance, Gulmayra is also head of a local agricultural cooperative, Ar-Ai, which for the last two years has been receiving more and more requests for fresh produce from the nearby city of Stepnogorsk due to the quality of the cooperative’s food. According to her, the owners of household plots usually grow food without the use of chemicals and try to apply only organic fertilizer.

“People in this city are searching for our product because it is fresh, and the taste is different,” she says.

Rural people in turn face challenges in meeting such a demand because, on the one hand, two cows owned by a female farmer are no longer sufficient but, on the other hand, the female farmers cannot take out loans to buy more animals because they have nothing to offer as security. With the high demand from one side and the capacity that rural women have on the other, Gulmayra saw an opportunity for both:

“I thought, why not connect urban women with rural women. Thus, rural women can strengthen their enterprises.”

Her NGO made a presentation in Stepnogorsk to which it invited the city’s citizens, small family farmers, and the media and offered the residents the ability to ‘rent a cow’. This involves an urban consumer buying a cow and renting it to a rural woman for six years who signs a written agreement to take care of the cow. A deal such as this presents an advantage to the consumer as the price of milk on the market increases every year and, by renting out the cow, the urban woman receives fresh dairy products on a regular basis. Under the agreement, she receives three litres of milk a day some of which can come in the form of processed food such as sour cream or cottage cheese. The NGO of which Gulmayra is head acts as a coordinator to fully follow and monitor the process while helping both the producer and the consumer:

“Normally we only coordinate the project for a couple of months and then the project gets on by itself. They become friends and go to see each other.”

Gulmayra underlines that although this is an agroecological approach, it involves much more than simply buying and selling food; both the urban and rural women develop a friendship and start learning from each other. For instance, one of the beneficiaries who read about the project in a newspaper and decided to get involved has already had a cow on her balcony for two years and is very happy.

As the urban women only take as much of the milk that their cows produce that is sufficient for them, they can sell the rest of milk. As one cow gives about 10 litres of milk per day, and only three are given to the women who own the cow, there are still seven litres left. The rural women can process this and sell the dairy products to increase their income. According to Gulmayra, the rural women thus become experts and true entrepreneurs. Gulmayra emphasizes that one of their rural producers who is also a teacher used to spend the majority of her salary on food but now that she produces enough food for her family, her income has increased.

The project seems to be gaining popularity as gradually the word spreads in Stepnogorsk:

“We had so far only three projects, but everyone was happy. The pandemic slightly hampered the work, and we did not advertise much. People find out about us by ‘word of mouth. Now, for instance, there are also chickens on the balcony offering consumers fresh eggs.”

Gulmayra concludes that the biggest advantage of this project is that “there are no grants, no budget financing; there is only a connection established between the consumer and the producer.”