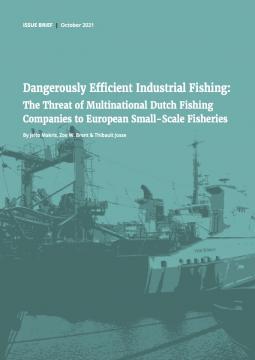 Within the European fishing fleet new generations of technologically advanced, hyper efficient industrial vessels, have gotten too good at fishing. This limited number of vessels has a massive impact on the ocean. Fish stocks have largely declined since the 1980s, but not all fishers contribute to the problem to the same extent, nor are all fishing livelihoods impacted to the same degree. The crisis of overfishing, fuelled in large part by a small number of vessels, is threatening the livelihoods of coastal communities and small-scale fisheries around the world who depend on the ocean as a source of food and income.

Download the full issue brief in English or French.

The Common Fisheries Policy (CFP) is the primary frame- work for European Union (EU) member states to collectively manage their waters. Established in 1970, its objectives are to foster the conservation of fish stocks and the economic viability of European fisheries. It has been implemented through top-down measures, large amounts of public subsidies, and catch-based management rules (TACs) established on commercial species at EU level and distributed through quotas at the national level. In this process, fishery policies have facilitated the industrialization of the fleet and the development of large, automated supertrawlers. Moreover, these policies have not prevented large profit-driven fishing companies from grabbing a majority of the quotas. To stay competitive, companies have accumulated capital and fishing rights by acquiring or merging with less competitive fishing enterprises. These companies have also expanded vertically across the supply chain and now make vast profits from the catching, processing, trading and export of fish. Centralisation of capital in the fishery sector existed long before the 1970s, but as we explain below, new market-pressures, technological change and incentives created by the CFP have accelerated the process.

As a result, small-scale and artisanal fishers throughout Europe have been squeezed between declining fish stocks and unfavourable policies. From 2000 to 2010, the small- scale fishery sector’s employment dropped by 20-30%.8 In the same period, the industrial fleet achieved record profits and shareholders of the large fishing companies made millions.

Europe’s fleet lost 5505 vessels between 2013 and 2019, however, the overall catch capacity remained almost at the same level. In other words, there are fewer ships, but those that remain, are larger and have higher catch rates. Indeed, the large capital-intensive industrial ships can capture larger quantities of fish at a much higher speed than smaller boats. This kind of efficiency, however, is not ecologically sustainable, given the declining fish stocks across much of the ocean. It also does not value the ways that smaller scale fishers provide a diversity of services to Europe’s food systems and communities that the large companies do not.

In its European Green Deal, the EU stresses that it is not enough to have efficient food systems but that food production should yield fair returns, be resilient in times of crisis, have a positive/neutral environmental impact and improve the livelihood of primary producers. Small-scale fisheries across Europe do exactly this. With their knowl- edge about local ecosystems, they can help ensure sus- tainable methods of fishing. They provide fish for human consumption rather than industrial uses, which makes their efforts central to ensuring resilience in the face of food insecurity. Overall, these fishers contribute to rural development and local economies and play a role in the culture and heritage of communities that goes far beyond employment.

Despite the debates about the definition of small-scale fishing (see box 1), all of these small and midsized boats pale in comparison to the size of the super trawler ves- sels of the industrial fleets. Most striking are the pelagic and demersal (box 2) giant industrial trawlers owned by multimillion dollar enterprises. Two of the largest ones in Europe are the Cornelis Vrolijk B.V. and Parlevliet & Van der Plas group, which are both based in the Netherlands. Their super-trawlers reflect a significant jump in size – measuring more than 80 meters – and capacity, such as the 144m Annalies Ilena, but more notable still is the strong influence these companies have had over the years on European fishing regulations. Their ascension has been made possible by a policy environment that prioritized the growth of the large-scale industrial fishing sector.

In this brief, we focus on the case of these two Dutch multinational fishing companies, exploring how they have consolidated their dominant position and the ways that these are undermining European small-scale fisheries and fuelling overfishing. First, these companies have accumulated fishing rights through lobbying and quota grabbing. Secondly, they capture public funding in order to increase efficiency to dangerous levels, via what we call harmful subsidies. Third, they have pushed technological limits in the name of efficiency. And fourth, transparency issues and a lack of monitoring have facilitated fraudulent and illegal fishing practices in the name of increasing profits. We then take a step back to evaluate who wins and loses when this kind of efficiency is prioritized and note that a future of dangerously efficient fishing practices is far from set in stone. There are numerous examples of mobilization against super trawlers and emerging alternatives such as Community-Supported Fisheries (CSF), that can provide the consumer with locally-sourced fish with low environ- mental impact and serve as the foundation for collective organizing between small-scale fishers and consumers envisioning a different, less efficient, more ecologically sustainable and socially just future.