In 2007 an alliance of social movements took the initiative to organise an international meeting on food sovereignty in Mali. The principle of food sovereignty was first launched by Via Campesina in 1996 during the FAO World Food Summit which took place in Rome. It is a policy framework advocated by a number of farmers’, peasants’, pastoralists’, fisherfolk, Indigenous Peoples’, women’s, rural youth and environmental organisations.

Since then food sovereignty has played an increasingly important role in the debate on agriculture and alternatives to neoliberal policies. Before the introduction of the food sovereignty policy framework, food security was limited to searching for ways to guarantee sufficient food through trade or food aid, at national or international levels. Food sovereignty puts agricultural producers and consumers at the core of the debate, and supports all peoples in their right to produce their own food independent of international market conditions, and to consume local foods.

In view of the failure of neo-liberal policies and the deteriorating living conditions of both rural and urban societies, a growing number of political decision makers and social movements are taking an interest in food sovereignty. A group composed of Friends of the Earth International, Via Campesina, the World March of Women, ROPPA, WFF and WFFP organised Nyéléni 2007, the World Forum for Food Sovereignty.

The forum in Mali brought together more than 500 representatives from more than 80 countries. Organisations representing peasants/family farmers, artisanal fisherfolk, indigenous peoples, landless peoples, rural workers, migrants, pastoralists, forest communities, women, youth, consumers, environmental and urban movements gathered together in the village of Nyéléni in Sélingué, Mali to strengthen a global movement for food sovereignty. This gathering was a great opportunity and a great milestone to reaffirm the right to food sovereignty and to clarify its economic, social, ecological and political implications. It also strived to create an international process with the aim of achieving recognition of the right to food sovereignty. The organisers made a deliberate decision to hold this meeting in Africa, where agriculture plays a central role, and where numerous rural and urban families suffer from hunger despite the abundance of natural resources. Mali was a natural choice. It is a democratic country where civil society organisations, be they trade unions or other types of association, enjoy freedom of action and expression. Mali is one of the first countries in the world to have made food sovereignty a policy priority with its new agricultural framework law.

This forum was the inspiration for the European food sovereignty movement to get together in 2011 and agree on the Nyéléni Europe Declaration. 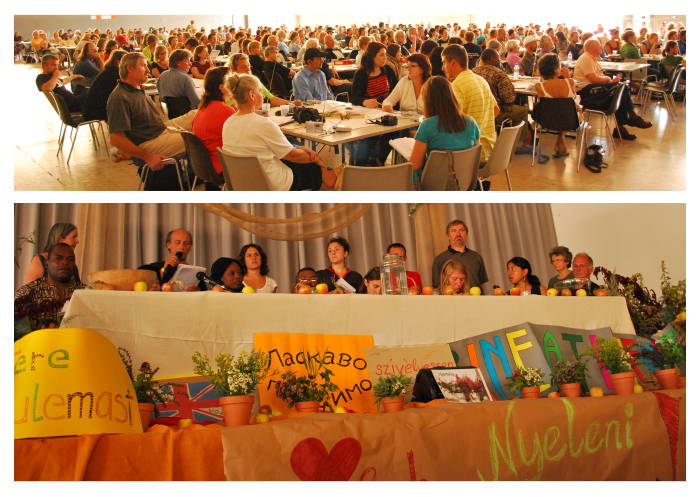 The Nyéléni Europe Forum in Austria acted as a catalyst for opening a space in Europe to define the struggles and strategies necessary to create a movement for Food Sovereignty which can challenge the dominant forces of production and consumption present in today's society. The vision of food sovereignty for Europe is based on the principles defined at the Nyéléni forum in 2007. The Nyéléni Europe forum brought more than 400 women and men together from 34 European countries from the Atlantic to the Urals and Caucasus, and from the Arctic to the Mediterranean, as well as international representatives from diverse social movements and civil society organizations from across the world.  The aim of the meeting  held from the 16th to the 21st of August 2011 in Krems, Austria was to take a step forward in the development of a European movement for Food Sovereignty. The process for this Forum was initiated by the European Coordination Via Campesina, Friends of the Earth Europe, ATTAC Europe, Vredeseilanden, the IPC for Food Sovereignty, and the International March of Women, as well as national platforms for Food Sovereignty in Hungary, Austria and other countries.

The results from Krems are the Nyéléni Europe Declaration, and the Synthesis Report and Action Plan. The Declaration outlines our common vision for, and commitments to realizing food sovereignty in Europe. The Action Plan was prepared  to put our visions into practice. This document is organised around three keywords: transform, resist and build. We transform the current agricultural system, resist the agro-industrial food system and build the movement for food sovereignty in Europe. 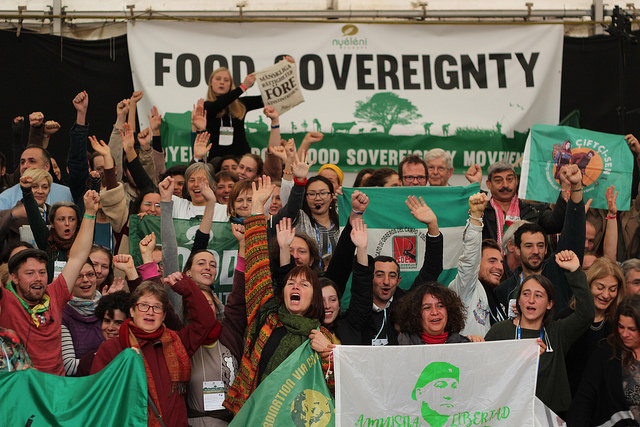 Five years later, the 2nd Nyéléni Europe Forum for Food Sovereignty took place in Cluj-Napoca, Romania between 26th -30th October 2016. The Forum gathered over 500 delegates from 43 countries, from the Urals and Caucasus, and from the Arctic to the Mediterranean, representing 290 civil society organizations of peasants, fishers, pastoralists, indigenous people, consumers, trade unions, environmental justice, solidarity, and human rights organizations, community-based food movements, journalists, and researchers working for food sovereignty in Europe and Central Asia at different levels. The aim of the forum was to share experiences, build on our common understanding of food sovereignty, share ideas for powerful joint actions, discuss strategies to relocalize Europe’s food systems, and explore how to influence key policies in Europe. The gathering was an important stepping stone for building a strong food sovereignty movement in Europe, especially in Eastern Europe, as well as in several other European countries where no food sovereignty platforms previously existed. The forum was also a first step towards structuring the European movement and giving it visibility through the planning of shared actions.